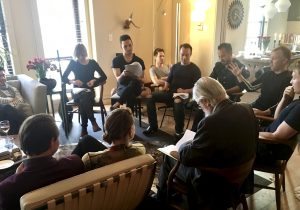 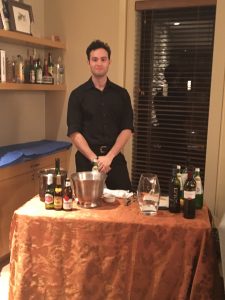 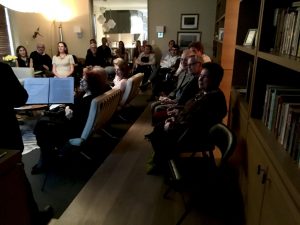 Atelier86 provides writers, artists, musicians, and other cultural figures an intimate salon-style setting to exhibit their work in a supportive environment.  The name "Atelier86" derives from the French word "Atelier" which loosely translates to English as "workshop" but whose meaning includes an artist's studio.  In fact, without further clarification, the term Atelier is more likely to refer to an artist's or an artisan's studio than, say a welder's workshop.  "86" refers to the slang term referring to cutting or getting rid of as often happens in the final editing process.  Taken together, Atelier86 an informal gathering for artists and cultural figures to hone their craft and get feedback from friends in a salon-type environment.

In many cases, Atelier86 salons serve as a type of dress rehearsal prior to the performance in a larger setting.  Participants experience presentations and artistic performances, often in the late stages of development, before being finalized.  Frequently, participants interact with the presenters and may engage in discussions that lead to final artistic decisions.  In all cases, Atelier86 seeks to provide an opportunity for the artist or presenter to explain their work and get feedback from colleagues and interested attendees.  Typically, events include time for both discussion as well as cocktails and hors d'oeuvres.

Ultimately, Atelier86 is simply an informal group of people who share a strong interest in artistic and cultural events.  Atelier86 has no organizational affiliations, memberships, subscriptions, sponsorships, or other commercial arrangements.  Attendance is complimentary and by private invitation only.  Attendees usually include both professional peers of the artist or presenter and others with an interest in the genre. Our informal leadership team strives to keep events running smoothly.