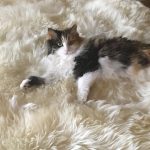 Pamuk served as Atelier86's founding artistic director from 2015 until her untimely passing from kidney failure on April 2, 2018. As Lao Tzu said, "The Candle that burns twice as bright, burns half as long." A Turkish Angora, Pamuk hailed from Cappadocia in Central Turkey, which gave her a unique perspective bridging both eastern and western cultures.  Pamuk immigrated to New York in 2011, largely because she yearned for artistic freedoms not always available in her homeland.  In her free time, and when not napping, Pamuk took advantage of the many cultural activities available in New York City. We miss her tremendously, and will always be grateful for her dedicated service and artistic insights.

While Pamuk can never be replaced, Muffin joined as a well-qualified successor in July 2018.  Meanwhile, Roary worked overtime to handle her responsibilities through the remainder of the 2017-2018 salon season.