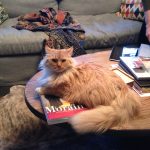 Roary serves as Atelier86's Executive Director.  A Maine Coon, he literally has New England pragmatism in his genes.  Growing up on the streets and later living in a shelter, Roary learned to appreciate the value of a dollar.  He often sits on shelves or other high perches to keep a careful eye on operations.  Roary began in 2015 as the operations director and perfected his craft working with Pamuk, Atelier86's founding artistic director. He was promoted to executive director after Pamuk's passing in March 2018. We count or Roary to keep Atelier86 running efficiently.